skip to main | skip to sidebar

It has been down for a few hours since early morning
Our Hosting company said it's their server problem. Emerge are still working on it.
Very sorry !
I hope you will come back again to buy
Posted by MoreSales.com.my at 8:50 AM 2 comments: 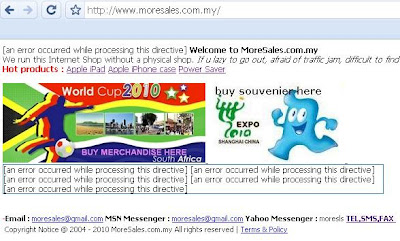 We are waiting for our hosting , Emerge System Sdn Bhd , to rectify the problem.
Hopefully doesn't take long
Posted by MoreSales.com.my at 10:52 PM No comments:

our Ebay account Moresales888 has been suspended by stupid reason 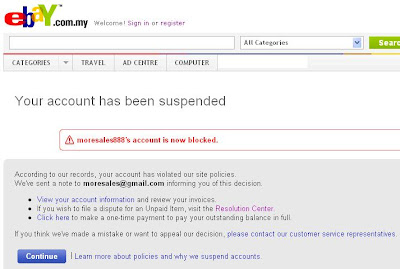 The Stupid Reason is
we used some celebrity names in our posting
which Ebay prohibited as in http://pages.ebay.com.my/help/policies/intellectual-property-ov.html
But there are still thousands of posting with name of Rooney, Obama, Eminem
Ebay.com may not suspend them, because Ebay.com need to posting fee.
However Ebay.com.my is free, therefore Malaysia sellers are first to be suspended
Anyway, our main selling is www.MoreSales.com.my.
Those who have bought from us via ebay, please continue to support us . We will accept paypal for buyer protection.
Thank you.
Posted by MoreSales.com.my at 1:52 PM No comments: 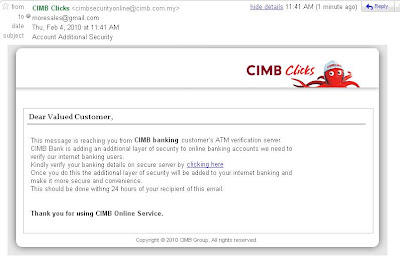 Posted by MoreSales.com.my at 11:58 AM No comments:

Good to know one competitor is dead :)
Posted by MoreSales.com.my at 12:30 PM No comments:

ONLINE banking is a convenience to many busy people. However, it brought misery to a 26-year-old woman, who wished to be known only as Jenn, who lost RM1,900 from her one-month-old account on Dec 2.

Jenn said the amount was transferred to a third party account without her knowledge after she had logged into the bank’s system using her logon and password.

“One morning in early December, I received an email from Maybank stating that I had a login with an incorrect password in the Maybank system.

“After closing the email, I logged into the system and entered the correct password that it needed.

“However, on the afternoon of the same day, I received an SMS fromMaybank2u.com that RM1,900 from my account that I had opened at the Maybank Taman Midah branch had been transferred to a third party account,” Jenn said at a press conference called by Bukit Bintang MP Fong Kui Lun.

She has since lodged a police report at the Batu 9 Cheras police station.

In the police report, she said when she went to the branch at 2pm the same day, a bank officer named Raymond Lim had given her the funds transfer statement in which she saw that her money had been transferred to an account belonging to a Malay woman named Mayana Muhamad.

Jenn called up the Maybank headquarters to seek an explanation on the issue, and was disappointed that the personnel were not helpful and only provided a written reply to her one month later.

“I had been using another bank, where security was much tighter, before using Maybank’s online banking when I changed job,” she said, adding that she had created the account only in November.

“The RM1,900 was almost all my savings! The officer in the headquarters told me that the police investigation must be completed before action could be taken.

“He also told me that although the bank had contacted the third party, the woman was not cooperating so they could not do anything. Would she cooperate if she is the culprit?” asked the frustrated Jenn, claiming that the bank personnel had even told her there was a queue of other fraud victims.

In Maybank’s written reply to Jenn, virtual banking cyber security manager Baizura Ahmad wrote that following a comprehensive investigation of the said transaction, they had found that a valid user name and password were used to access her account viaMaybank2u.com.

“Our findings revealed that the internet banking username and password were used on Dec 2 to successfully make a login to your Maybank account via Maybank2u.com,” Baizura had stated.

“Based on our investigation into our system, our records showed there was no system failure, problem or any breach of security ofMaybank2u.com in processing the above activities at the mentioned date and time involving the above account.

“In view of this, we very much regret to inform that the bank is unable to accede to your request of the said amount,” the reply said.

In the reply, the bank reiterated that it does not send any email, SMS or make telephone calls to customers to request for personal details, account details of TAC number.

“Customers are also reminded never to disclose their account and banking information to anyone. The bank provides safety information and alerts in Maybank2u.com as well as through our other delivery channels,” the reply stated.

Jenn said she felt helpless on the issue and had since terminated her online account with the bank.

Fong said he would be writing to Bank Negara on the urgent need to monitor the security of online banking.

“Since the matter involved a transfer within the same bank, and the person’s name and account number are known, there is no reason why the bank is unable to do anything.

“The money was transferred without the victim’s knowledge, so it is only right that settlement is made to her.

“I also hope the Finance Minister will respond to this as such a case can result in the public losing confidence in online banking,” he said.

Posted by MoreSales.com.my at 10:06 AM No comments:

1. Canadian Pharmacy
(Ukraine/Russia)
Pharmaceutical spamming has intensified during the worldwide swine-flu pandemic—for the most part, it is advertising for counterfeit Tamiflu. Zombie computers infected with a Trojan virus are now sending out tens of thousands spam messages a day.
2. Leo Kuvayev a.k.a. BadCow
(Russia)
The 36-year-old Russian is being sought by the FBI and the British police. He is called the king of world spam: he was the first to hide messages in graphic files to circumvent filters and use viruses to create zombie networks. Kuvayev allegedly deals primarily in pharmaceutical and porn spam.
3. HerbalKing
(India/New Zealand)
A gang that sent out one third of all spam in the U.S. last year operated through a botnet of more than 35,000 computers, advertising medications from India and porn Web sites. HerbalKing's operations were suspended, and its leader, New Zealander Lance Atkinson, declared that he was prepared to pay a fine of $92,715.
4. Vincent Chan a.k.a. yoric.net
(Hong Kong)
Chan and his comrades from China specialize in medical messages, but also promote watches, printer cartridges, and mortgages. In 2004–2005 they worked through the free Web-hosting service Yahoo Geocities, by automating the creation of pages that forwarded visitors to advertised Web sites.
5. Aleksei Polyakov a.k.a. Alex Blood
(Ukraine)
No one knows whether the Ukrainian's name is really Alex Polyakov or he took a pseudonym from John Le Carré's book Tinker, Tailor, Soldier, Spy. He is widely described as a specialist in child pornography and one of the biggest distributors of Trojan viruses.
6. Nikhil Kumar Pragji a.k.a. Dark-Mailer
(Australia)
This Australian is a major spammer and author of the Dark-Mailer program, which enables the dispatch of 500,000 messages per hour and, according to users, is distinguished by a convenient interface. It is recommended that the program be downloaded for money—$499—since the free versions contain Trojans.
7. Pyotr Levashov a.k.a. Peter Severa
(Russia)
The creator of Trojans and author of spam programs became known to the public last year during a trial of Alan Ralsky's spam gang from Detroit, the largest in the U.S. Nine others were arrested with Ralsky, but not Severa, who is believed to be living in Russia and still working with hackers.
8. Yambo Financials
(Ukraine)
The large spam organization deals in practically everything, including sending out pornography involving children and animals, promoting pirated software and medications. In addition, the Ukrainians provide "financial service" through a phony bank.
9. Ruslan Ibragimov a.k.a. send-saf.com
(Russia)
The author of viruses and spamming software. Works through Russian servers. In addition, sells spammers lists of recently infected computers.
10. Rove Digital
(Estonia/Russia)
This partnership was founded in Tartu in 2002, and four years later it was recognized as the best IT firm in Estonia. Last year the firm was shut down, and its director, Vladimir Chashchin, was convicted of bank fraud. The Estonian press wrote that Rove Digital has spammed "by the millions." Chashchin tried to shift blame to a Muscovite named Mikhail, but he was not found.
© 2009
taken from http://www.blogger.com/post-create.g?bl
Posted by MoreSales.com.my at 11:48 PM No comments:

Posted by MoreSales.com.my at 9:00 AM No comments:

Posted by MoreSales.com.my at 8:53 AM No comments: 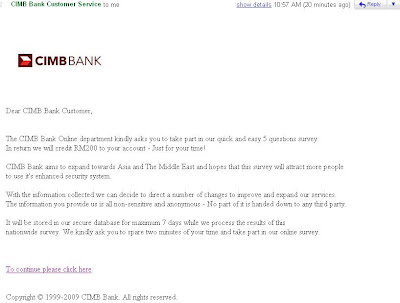 Posted by MoreSales.com.my at 11:19 AM No comments:

Posted by MoreSales.com.my at 10:31 AM No comments: